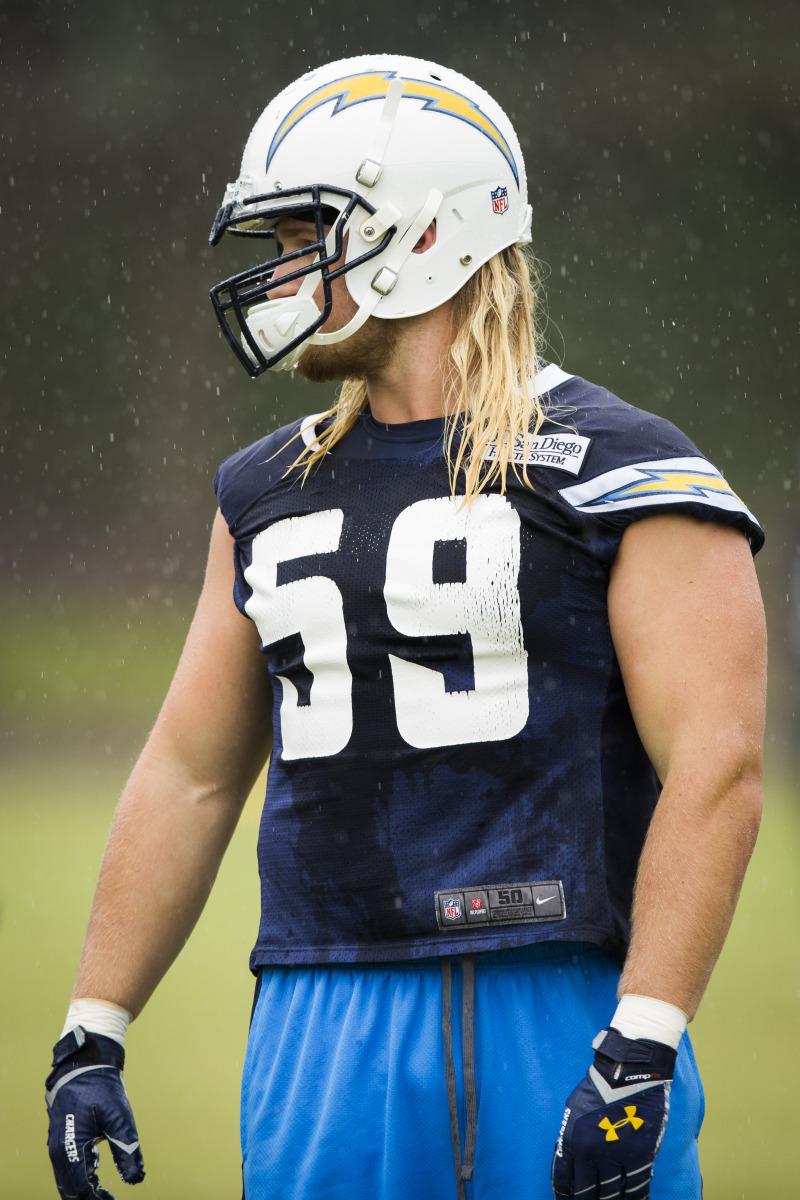 There are a lot of things that stand out about rookie pass rusher Brock Hekking. He is a powerful tackler. He uses his hands exceptionally well. And he is a relentless defender who never takes a play off. But when Scott Boone took over as Nevada’s defensive coordinator prior to the 2014 season, one of the first things he noticed about his star D-end was his hair.

Boone recalls: “When I first got [to campus] I thought, ‘What’s up with this dude with the mullet?’ [But] I sat down with him and he said, ‘Coach, it’s just my look. I’m really very serious. I’m not really a clown.'”

Hekking went on to have an All-Mountain West season for the Wolfpack, including 56 total tackles, 10 TFLs and 5.5 sacks.

He signed with San Diego as an undrafted free agent and will bring his lighthearted approach to training camp this summer, as he makes the transition from college defensive end to pro outside linebacker.

Boone feels Hekking has a good shot at making the team, citing his work ethic and versatility.

“What Brock brings to the table is a tremendous work ethic and a really, really high motor,” Boone said. “People think he’s just a pass rusher, [but] he’s really an all-around intense, high-motor guy [who] tackles well. He’s a play-hard-every-down kind of guy.”

Never was that more apparent than in a game last season against Washington State, when Hekking stuffed Cougars RB Jamal Morrow on a fourth down late in the game. On TV, it was the exact opposite of a famous play from the 1980’s where Seahawks defender Brian Bosworth gets steamrolled by Bo Jackson; this time, the mullet won.

Boone said the play “[won] the game for us.” And for what it’s worth, fellow Chargers rookie John Lowdermilk says Hekking reminds him of Bosworth.

Boone supports Hekking’s choice to go to San Diego, noting the connection Nevada head coach Brian Polian shares with the Chargers. Polian was a high school and college teammate of Chargers GM Tom Teleso, who spent a majority of his career working under Brian’s father, Bill, in Indianapolis. It’s no surprise, then, that San Diego’s coaching staff features two former players with close ties to the Polians — Frank Reich and Pete Metzelaars — the latter of whom played with Boone at Wabash College.

The connections don’t stop there, either. While at William & Mary, Boone coached Chargers nose tackle Sean Lissemore, a player he still keeps in touch with regularly.

“I sent [Lissemore] a message the other day and told him to look after Brock for me,” Boone said.

“I hope [Lissemore] takes Brock under his wing because they’re similar guys…both [are] classic overachievers. They got where they got because they play really hard and work really hard.”

Although the Chargers are stacked at outside linebacker, having selected a player at that position in each of the last four drafts, Boone is confident there is a spot on the 53-man roster for his pupil.

“We ran down some kickoffs late in the year. He runs well, so he would be fine with [special teams]. I’m sure he could cover punts, protect [the punter]. He’s a good athlete; a big, good athlete.”

For all of his on-field ability, it’s most likely where Hekking will stand out most is the locker room.

For someone who got around campus in a camouflage golf cart with “#teammullet” stenciled on the front, “fun” might be an understatement.

Can Hekking win a spot with the Chargers? Join the discussion inside our new message boards!