Brock Hekking: ‘I like to play full tilt, full time’ 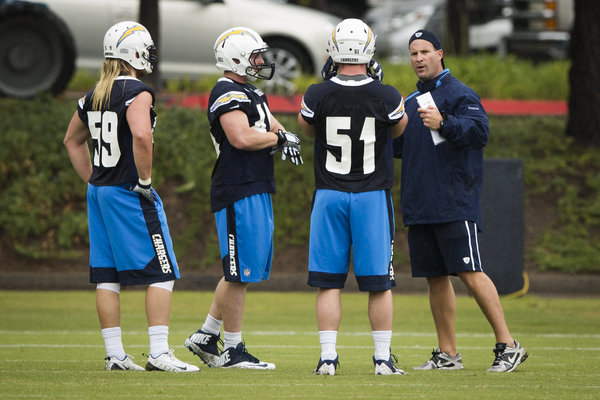 Rookie OLB Brock Hekking accomplished a major career goal when he signed his contract with the Chargers, officially making him an NFL player. The next goal on his list will prove even more difficult to accomplish: earning a spot on San Diego’s 53-man roster. Just like he has done throughout his football journey, Hekking is ready to beat the odds.

“This is a dream come true,” Hekking said. “It’s something I’ve worked many years for and the work is not done yet, but hopefully I can make this dream a reality soon.”

At 6’4″ and 255 pounds, Hekking is a heavy-hitter who will go down as one of the best defensive players in the history of Nevada’s football program. In addition to earning All-Mountain West honors in each of his final three seasons, he ranks fourth all-time with 22.5 sacks and was named the Bronko Nagurski National Defensive Player of the Week for his dominating performance against Hawaii in 2013. In that game he had three sacks, two forced fumbles and an interception to go along with two PBUs and 2.5 TFLs.

Wolfpack defensive coordinator Scott Boone says Hekking “was really good for us last year, not only in pass-rush situations but in chasing down plays to [save] a couple of touchdowns.”

Hekking faces an uphill battle to make San Diego’s Opening Day roster. The Chargers have drafted an outside linebacker in each of the last four drafts, including North Dakota State’s Kyle Emanuel in the fifth round of this year’s draft, so there will be no shortage of competition.

That being said, the Chargers always give undrafted rookies a real chance to compete. At least one undrafted rookie has made the team in each of the last 18 years, the longest active streak in the league.

When asked what he needs to do to keep that streak alive, Brock said: “It’s going to have to be my motor. I’m going to have to play 110 percent all the time to show my relentlessness out on the field … never give up. I like to play full tilt, full time and I think that’s what’s going to stand out the most.”

After taking a step back statistically as a senior — primarily caused by facing constant double-teams — Hekking was not invited to the East-West Shrine Game or the NFL Combine. He says the snubs only added more motivation.

“Coming out of high school, I was never a really [a heavily] recruited kid. [Nevada] was pretty much my only offer and I used that as motivation. I did have a chip on my shoulder and not getting invited to that stuff added to it.”

Rather than give up, Hekking worked even harder. He trained at Exos in Phoenix, an elite athlete performance center that has worked with hundreds of prospects who went on to enjoy successful careers.

A solid Pro Day — along with some unique connections between a couple of Wolfpack coaches and the Chargers front office — found Hekking signing in San Diego as an undrafted free agent.

Boone concedes, and Hekking agrees, that his road to NFL success probably begins on special teams.

“Right now, at first, I see myself playing a lot of special teams,” Hekking said.

Both on defense and special teams, Hekking will compete with fellow rookie Emanuel, who he trained with at EXOS. The two have become friends and are determined to push each other throughout the process.

“It will be fun,” Hekking said of competing with Emanuel. “It’s a friendly competition. We were competing against each other when we were out there [at Exos] and we pushed each other. He will motivate me and I will motivate him.”

While the Chargers chose Emanuel, it was Hekking who chose the Chargers once he became a free agent. He says the decision was both easy and premeditated.

“I always wanted to go down to San Diego,” Hekking said. “They flew me down there. I had a great visit with them, met the coaches, loved them, and I knew right off the bat that if I wasn’t drafted I was going to San Diego.”

Chargers fans will enjoy watching Hekking and his mullet fly around during training camp and the preseason. And if he dominates there like he did at Nevada, the mullet may start appearing on Sundays this fall, as well.

Can Hekking win a spot with the Chargers? Join the discussion inside our new message boards!