Can SD Rally Enough Support to Keep the Chargers? 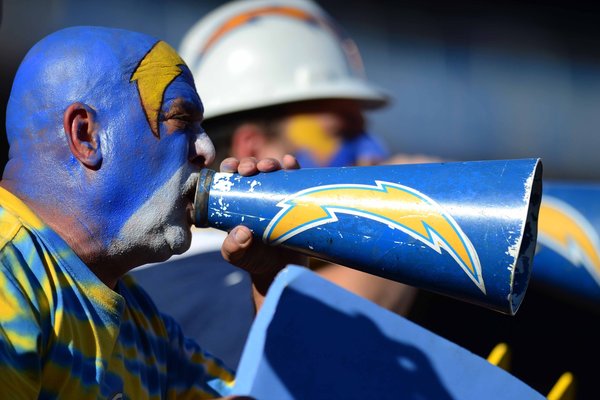 This writer has been to nearly three dozen major American cities and San Diego is tops on the list of most beautiful, most relaxed and best weather, of course. But one list it falls to the bottom of is home-team support.

Chargers games were blacked out when the team was winning. The Padres couldn’t sell out despite a pennant race. The Clippers left years ago. Hey, San Diego did just get a hockey team, but the over/under on when they move is three years.

So what am I getting at? The residents of San Diego need to come to a consensus with the Chargers and get a stadium built. I believe the Chargers should pay for it. But a site hasn’t even been selected and there’s the real possibility that, in a year or two, your beloved Chargers will be the L.A. Chargers. And that will be a major blow to San Diego — its psychology, economy and reputation.

The Los Angeles/San Diego rift will get deeper. America’s Finest City will have hosted its last Super Bowl. Countless world headlining events will skip the southern most part of So Cal for that monstrosity just up Interstate 5.

Would San Diego recover from losing the Chargers? Sure, life goes on. But the only thing more synonymous with San Diego than fish tacos and sunshine are the Bolts. The good times are still to come, but if the Chargers go to the City of Angels then the best of times will be just memories. Highlights of Dan Fouts and Kellen Winslow and LaDanian Tomlinson will be all that’s left.

And the song … singing to the tune of the San Diego Superchargers will no longer evoke pride and swagger, but loss and disappointment. L.A. will come up with a Justin Bieber version that will make even the most casual Chargers fan nauseous.

Again, the Chargers should pony up at least 80-90 percent of the new stadium costs. But the residents and elected officials need to demonstrate the city’s pigskin penchant to keep the Blue and Gold here. Kevin Faulconer should drop his hard-line approach and the Chargers front office should be transparent and negotiate in good faith. Everyone needs to come to the table, find a win-win solution and get an all-purpose stadium built.

And if you’re still not convinced just how important it is for the Chargers to remain in San Diego, then imagine Los Angeles and the Chargers celebrating a Super Bowl victory within the next five years. GM Tom Telesco and coach Mike McCoy are the ones to bring home the Lombardi trophy. The question is, where will that home be?

The first Chargers Super Bowl parade should be down Broadway, not Figueroa.