Can the Chargers Offense Get Back to the Top? 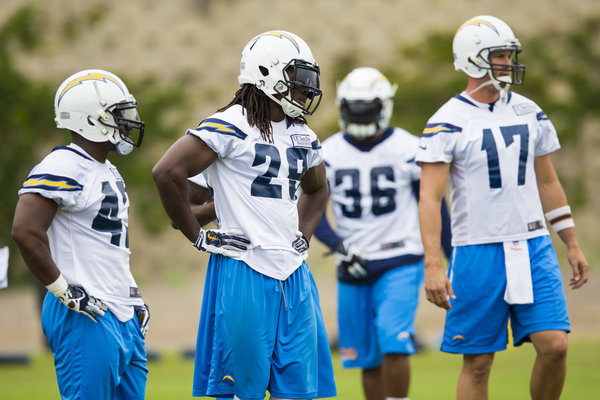 It wasn’t that long ago that the Chargers led the league in total offense. It was 2010, in fact, when San Diego paced the league with 395.6 yards per game. Those weren’t empty yards, either, as that offense averaged 27.6 points per game.

Can this year’s Chargers offense be better than that group? There is plenty of reason to believe so.

Philip Rivers is a better quarterback now than he was in 2010, having become much more efficient under Mike McCoy’s tutelage. Rivers has thrived in McCoy’s offense, which plays with pace and allows Rivers to get up to the line quickly, survey the defense and make adjustments.

But what about Rivers’ supporting cast? That’s where the comparisons get entertaining.

The situation at running back is remarkably similar. In 2010, the Chargers kicked off the post-LaDainian Tomlinson era by introducing rookie first-round pick Ryan Mathews. He was backed up by scat back Darren Sproles and compact runner Mike Tolbert.

This year, San Diego begins the post-Mathews era with rookie first-round pick Melvin Gordon. He will share a backfield with scat back Danny Woodhead and compact runner Branden Oliver.

“I noticed early on that [Gordon] has great vision,” Rivers said. “Now he’s coming along as far as feeling very comfortable in what we’re doing.”

On the offensive line, you have to give the edge to the 2010 squad, despite the stellar job Tom Telesco has done in fortifying his line this offseason.

Marcus McNeill, Kris Dielman and Nick Hardwick are all better than any blocker on this year’s line. But while that line was dominant on the left side and suspect on the right (Louis Vasquez and Jeromey Clary), this year’s group figures to be strong across the board (although right guard may still an issue, depending on who plays where).

This year’s unit also has much better depth, especially at the tackle position. Joe Barksdale and Chris Hairston are far better options than Brandyn Dombrowski and Tyronne Green.

At receiver, things are close to a wash. Vincent Jackson is more dominant than any receiver on this year’s team, but Jackson only played in five games in 2010 due to a prolonged contract holdout. With V-Jax on the sidelines, Rivers spread the ball around between Malcom Floyd, Patrick Crayton, Legedu Naanee and Craig Davis. That’s not a bad group, but it’s not as dynamic as this season’s collection of Keenan Allen, Stevie Johnson, Dontrelle Inman and Floyd.

If Allen can make like Jackson and establish himself as a bona fide No. 1 receiver, it will lift the offense to another level. All signs point to Allen bouncing back from a somewhat lackluster sophomore season.

Perhaps the biggest edge this year’s offense has over the 2010 group is at tight end. Although Antonio Gates maintains his same spot atop the depth chart, Ladarius Green has a chance to be a difference maker. Green has a chance to finish in the area of 35 catches and 500 yards. In 2010, the backup tight ends (Brandon Manumaleuna and Kris Wilson) essentially functioned as extra offensive linemen.

“I’d be shocked if [Green] didn’t have his most productive year,” said offensive coordinator Frank Reich.

Are these advantages enough to make this offense even more productive than 2010’s version? There are still some smaller questions that must be answered before we can know for sure.

Can Chris Watt stay healthy and emerge as the leader of the offensive line? Can Gates keep playing like it’s still 2010? Can Gordon run more like Tomlinson and less like Mathews?

Those answers will come in time. What we know now is there is more offensive talent on this year’s team than there was on the 2010 squad that led the league in total offense. With good health, continued development and a few friendly breaks along the way, the Chargers should fight for another finish atop the offensive rankings and challenge the sacred 30-points-per-game barrier.

Do have a story idea you’d like us to tackle? Offer up your suggestions in our message boards!