Can the Chargers Win a Ring for M-80? 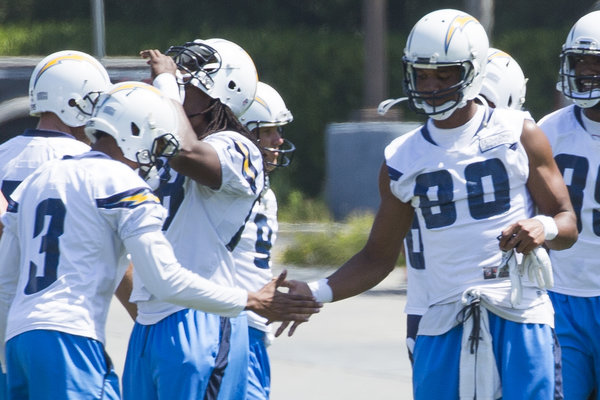 Every once in a while, a Chargers legend walks away and it makes you think, “Damn, I can’t believe we didn’t win a ring for that guy.”

I felt that way when LaDainian Tomlinson was released in 2010. That feeling returned after the 2012 season, when Quentin Jammer was not re-signed. It happened in tandem earlier this offseason, when mainstays Nick Hardwick and Jeromey Clary announced their retirements.

I hope I don’t feel the same way next offseason when Malcom Floyd announces his retirement.

I’ve covered the Chargers here on SDBoltReport.com for about 12 years and I’ve never encountered a player like Floyd.

My first interview with Floyd came over the phone when he was an undrafted rookie back in 2004. I had already interviewed his head coach from Wyoming at that point and was following up by interviewing Floyd himself. Two things stood out to me about that interview: 1) even though I set up the interview through his agent, Floyd called me from his cell phone and asked me to save his number; and 2) Floyd asked me as many questions about how his coaches back at Wyoming were doing as I asked him about life in San Diego.

I saved Floyd’s number and called him the next offseason for a follow-up interview. We chatted for nearly 30 minutes, even though he was busy shopping at Walmart at the time. That’s just the kind of guy Floyd is — he makes time for everybody.

My talks with Floyd became annual affairs. When he saw my number on his phone, he not only remembered my name but also my alma mater (University of North Carolina Wilmington, not exactly an easy one to remember) and our previous conversations. The guy cares about people, plain and simple.

Because Floyd is such a spectacular guy, it made it much more gratifying to watch his professional ascent. He caught Philip Rivers’ first touchdown pass in Week 17 back in 2004. He moved into the starting lineup in 2009 and became a fixture there; over the next four years he averaged over 45 catches and 790 yards.

It looked like his incredible run came to a tragic ending in Week 2 of the 2013 season, when he suffered a serious neck injury in a game against the Eagles and had to be carted off the field. Instead, he returned stronger than ever last season and matched his career-highs of 856 yards and six scores.

Despite coming off one of his best seasons, the end is near for Floyd. At 33 years old and entering the final year of his contract, he has talked openly about making this season his last.

“I have four kids now,” Floyd said earlier this month, according to UT San Diego. “I’m barely getting any time with them. I’ve got to go home and rest.”

The Chargers will miss Floyd. They’ll miss his deep speed and uncanny ability to win jump balls, a rare combination of traits that has allowed him to average more than 17 yards per catch for his career. They’ll miss his size (6’5″, 225 pounds) and ability to convert contested passes. And they’ll miss his willingness as a blocker, which helped runners like Tomlinson and Ryan Mathews gain extra yards down the field.

But more than anything, the Chargers will miss Floyd’s presence in the clubhouse. A genuine person like Floyd stands out in today’s NFL like an oasis in the middle of the Kalahari.

The Chargers have plenty of depth at receiver. Keenan Allen, Stevie Johnson and Dontrelle Inman are all under contract for at least the next two seasons, so there is some security there. There are also some talented undrafted players on the roster, such as rookie Tyrell Williams, who talked to us earlier this offseason about wanting to follow in Floyd’s footsteps.

Williams has a high ceiling, for sure, but there will never be another Malcom Floyd. Let’s just hope the Chargers can get their one-and-only a ring before he hangs up his cleats once and for all.

Can the Bolts win the Super Bowl and send Floyd out a winner? Discuss in the message boards!