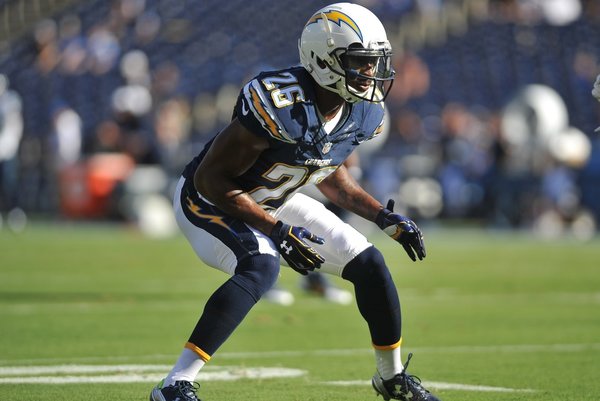 Expectations were not exactly high when the Chargers signed former first-round pick Patrick Robinson to a one-year, $2 million contract last offseason. Many analysts, myself included, feared Robinson might not make it out of camp as he battled with Steve Williams and rookie third-round pick Craig Mager for the starting nickel back position.

Robinson not only emerged as the starting nickel back, but he has proven to be one of San Diego’s biggest steals. He won’t come so cheaply next offseason, though, forcing the Chargers to decide whether to pony up for the versatile cover man.

Through 15 games, including nine starts, Robinson has racked up 47 tackles, an interception, a forced fumble and seven pass breakups. According to Pro Football Focus, he has a coverage grade of 78.8 (out of 100) and an overall grade of 80.1, both second-best among Chargers cornerbacks (behind Jason Verrett, of course).

Robinson has been amazingly consistent, too, never posting a coverage grade below 75.0 in any game this season.

The same cannot be said of the younger cornerbacks behind him on the depth chart. Williams, in particular, has been maddeningly inconsistent. Williams’ performance nose-dived after Week 8; he has finished with a coverage grade below 60.0 every week since with the exception of the Week 12 win over the Jaguars.

Mager has been better than Williams in coverage, but the rookie from Texas State has been a huge liability against the run. He was especially ineffective against the run in the Week 15 win over the Dolphins, with a run defense grade of 50.0.

With Williams and Mager not exactly lighting it up, the Chargers are under more pressure to re-sign Robinson. That will be even more true if the team releases veteran Brandon Flowers, whose 2015 overall grade (33.7) and coverage grade (34.7) are both less than half of what Robinson delivered in his first season with the Chargers.

What it figures to come down to – as it usually does – is money. If you’re looking for a point of reference, see the four-year, $24.5 million contract CB Davon House signed with the Jaguars as a free agent last offseason. It will likely take something similar for the Chargers to get Robinson’s signature on a contract.

That’s a steep price to pay, especially for a player who was inconsistent for much of his first five seasons in the league. But the Chargers should bite the bullet and pay up. There is already going to be a lot of turnover in the secondary – the Chargers will part ways with Eric Weddle and possibly Flowers, two players who were Pro Bowl candidates just a season ago – and bringing back Robinson is a good way to avoid exasperating that issue.

Plus, Robinson’s familiarity with the NFC South will come in handy next season when the Chargers face all four teams from that division. The Bolts will have road games against the Panthers and Falcons and host the Buccaneers and Saints. As for where they’ll be hosting those games? That – like Robinson’s contract status – is to be determined.

What should the Chargers do with Patrick Robinson? Discuss inside our new message boards!