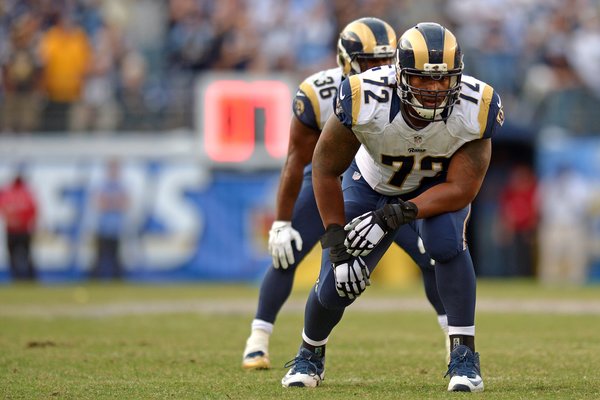 It’s truly impressive how GM Tom Telesco has remade San Diego’s offensive line this offseason, especially considering he did not spend a single draft on the line. His work continued on Tuesday when he signed Joe Barksdale — the best remaining free agent on the market — to a one-year deal.

Barksdale, a 2011 third-round pick of the Raiders who spent the last two seasons starting at right tackle for the Rams, gives the Chargers some options on the offensive line. He could serve as the swing tackle, taking over for the departed Willie Smith, or he could start at right tackle if coach Mike McCoy decides to bump D.J. Fluker inside to guard.

The former scenario is more likely. Although Johnnie Troutman comes off an up-and-down season that ended with him undergoing knee surgery, there is hope he will be better in 2015 if he has some stability next to him at the center position. Fluker would likely be a better guard than Troutman, but he is also a better right tackle than Barksdale.

Barksdale (6’5″, 326 lbs.), like Fluker, is a better run blocker than pass protector. He allowed 11 sacks over the last two seasons, often struggling with speedy pass rushers coming off the edge. That sounds a lot like Fluker, but San Diego’s incumbent right tackle is healthy now after battling nagging injuries for much of last season. He is also working on his conditioning and is in the best shape of his young career. He deserves the opportunity to defend his position.

If Fluker remains at right tackle, that leaves Barksdale to battle Chris Hairston, another veteran offseason addition, for the top backup tackle position.

Regardless of how things shake out, the Chargers have added depth and versatility to an offensive line that entered the offseason sorely lacking both qualities.

The Chargers released OT Bryce Quigley to make room for Barksdale on the roster.

Will Joe Barksdale wind up starting for the Chargers? Talk all about it inside our new message boards!