Coach: ‘We’re going to hear a lot from Kyle Emanuel’ 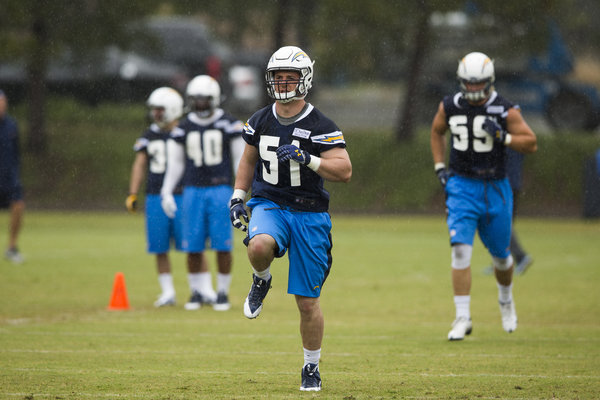 Before the Chargers selected Kyle Emanuel in the fifth round, the North Dakota State product was named first-team FCS All American and Missouri Valley Defensive Player of the Year. His dominant senior season included 19.5 sacks and 32.5 tackles for loss, numbers that helped him draw attention from several NFL teams.

“The Vikings, Pittsburgh, Cincinnati and Cleveland were the main ones that I know [were interested],” says NDSU head coach Chris Klieman. “We kind of thought he would be in that fourth, fifth or sixth round.”

It’s easy to see how Emanuel (6’3″, 255 lbs.) garnered so much interest. He plays with excellent leverage and a low body lean, allowing him to bend the corner and collapse the pocket. He is also light on his feet, demonstrating the ability to disengage from blockers, sift through traffic and sniff out the ball carrier.

In addition to those tangible attributes, there are also some intangible ones. For example, Emanuel is a proven winner. North Dakota won four straight Div. I FCS championships during his time with the program.

“Not very many college kids can walk out of their college career with more National Championships won than games lost,” Klieman said.

Critics will discredit some of Emanuel’s eye-popping statistics because he played against a lower level of competition. But turn on the game film and you will see some plays that only a handful of defenders are capable of making.

One that stood out to Klieman occurred during the Missouri State game last season.

“He intercepted a pass on a screen play, stiff-armed the quarterback, knocked him to the ground and made a nice return for about 40 yards,” Klieman recalls.

There is no question Emanuel has been well vetted. He played 15 to 16 games a season at NDSU, with some of his best work coming against Big 10 and Big 12 schools. He posited 10 sacks and 16.5 TFLs against top-25 opponents.

Emanuel began his college career as a linebacker before switching to defensive end. Even after making the switch, he was still occasionally asked to cover tight ends and running backs. Those various responsibilities have prepared him well for his role in San Diego’s hybrid 3-4 defense.

Another promising sign: Klieman says Emanuel was one of his best players on special teams.

“My guess is he’ll be on every special team,” he said.

As for playing significant snaps on defense, that will have to be earned. The Chargers are loaded with youth at outside linebacker, having drafted someone at that position four years in a row: Melvin Ingram (first round, 2012), Tourek Williams (sixth round, 2013), Jeremiah Attaochu (second round, 2014) and now Emanuel.

“We’re just excited that San Diego took a chance on Kyle from North Dakota State and we know he’ll represent his family and our university exceptionally well,” he said. “We’re going to hear a lot from Kyle Emanuel throughout his career in the NFL.”

One place we won’t hear from Emanuel is off the field; not in a negative way, that is. The NFL has seen several players tarnish the Shield in recent weeks with their moronic and selfish behavior (Ray McDonald, Prince Shembo, etc.), but Emanuel will never be clumped in with that bunch.

Klieman describes Emanuel as a “down to earth, easygoing Midwest kid. You’re not going to hear him in any trouble on or off the field.”

Coach talked to Emanuel shortly after he was drafted by the Chargers. After mentoring him for four seasons at NDSU, Klieman had to squeeze in one last piece of advice.

“Just do what you’ve been trained to do, and that’s be a great football player,” Klieman told Emanuel. “Just keep having that great motor and great energy you have and keep playing the way you’re capable of and things are going to work out fine.”

What kind of impact will Kyle Emanuel make this season? Join the discussion in the message boards!