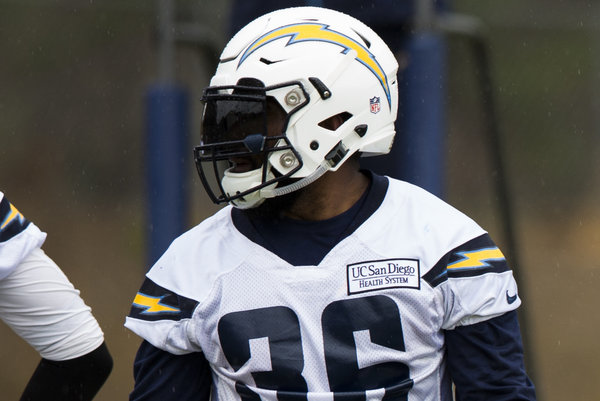 JaJuan Seider knows what it’s like to compete for a roster spot in San Diego. A former QB from Florida A&M, Seider was selected by the Chargers in the sixth round of the 2000 NFL Draft. He was drafted two years after Ryan Leaf and one year before Drew Brees.

“I was in Bobby Beathard’s last draft class,” Seider told SDBR. “We had Ryan Leaf and Jim Harbaugh, so there wasn’t a lot of room.”

Seider is now coaching running backs at West Virginia. And one of his pupils, RB Dreamius Smith, is following in his footsteps. Smith signed with the Chargers as an undrafted free agent and will try to overcome a crowded position group to win a roster spot.

According to Seider, Smith dealt with a similarly crowded backfield at West Virginia.

“At West Virginia, it was like a pro team,” Seider said. “[Smith] was competing with two to three other guys in the room, and it wasn’t like he was playing with average guys. He had to compete every snap, ever rep.”

Smith faced an uphill battle for playing time after transferring from Butler Community College prior to the 2013 season. In his first season at West Virginia, he was stuck behind Charles Sims (now with the Bucs). Last year, he was slowed in training camp by an injury and overtaken by Pitt transfer Rushel Shell.

All in all, Smith finished his two-year run with the Mountaineers with 183 carries for 945 yards (5.2 ypc) and 10 touchdowns.

“He was projected to be the starter (in 2014) and we were deep at running back,” Seider recalls. “He had a knee injury in camp and got passed up, but he’s a kid that’s willing to fight. He doesn’t give up.”

Smith’s limited role at West Virginia played a major role in his going undrafted. Also working against him was the fact the Mountaineers run a spread offense, which has a reputation for inflating numbers and developing skills that don’t translate well to the NFL.

Seider fervently disagrees with that generalization.

“All our backs are forced to catch, forced to block,” he said. “They’re skilled enough that when they get to the NFL, they know what to do. The NFL became a lot like the college game. The Patriots, Seahawks, they all use spread concepts. I call that B.S. I think our guys are more than prepared to be in the NFL.”

Smith (6’0″, 217 lbs.) is a power back with deceptive speed (he ran a 4.5 in the 40-yard dash). He breaks through arm tackles and has a nose for the end zone. He also shows some ability as a check-down receiver out of the backfield.

The knock on Smith is he lacks creativity and vision. He also has some ball security issues, having fumbled three times last season. Fortunately, all those things can be fixed as he gains a little more experience.

“He’s got all the measurable you look for as a running back,” Seider said. “I told him to just trust his body. He has a basketball background, so he’s a kid that the longer he plays, the better he’ll get. He’s just starting to understand the game of football. When he puts it all together he’s going to be a pretty good player.”

Seider knows from experience how competitive and crowded it can be on an NFL roster. After being edged out in his chance at the Big Leagues, he is doing everything in his power to make sure Smith is better prepared to seize his moment.

Just like everything in life, it starts with hard work.

“It’s a job. Every day you have to go out and work,” Seider said. “If someone’s outworking you, you’re going to get fired.”

Can Smith beat the odds and win a roster spot in San Diego? Join the discussion in our message boards!