Five Bold Predictions for the 2015 Season 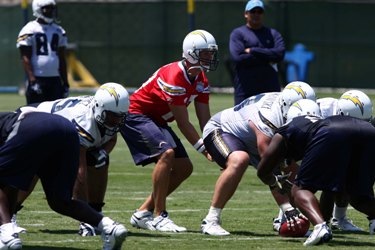 For example, before last season got underway, who could have guessed the Chargers would start five different centers? Or that Branden Oliver would do an amazing LaDainian Tomlinson impression by racking up 182 yards from scrimmage and two touchdowns against the Jets? Or that Malcom Floyd would bounce all the way back form a career-threatening neck injury to lead the team with 856 receiving yards.

You get the point … wild stuff happens every NFL season. With that in mind, here are five bold predictions for some of the wild things that will happen this season.

At some point this season, ILB Doanld Butler will lose his starting job. Butler had a less than stellar season in 2014 after signing a seven-year extension the offseason prior (with only three years guaranteed.) Butler posted a career-low 45 solo tackles despite playing in 14 games. Even more concerning, he failed to intercept a pass or force a fumble.

With the drafting of Denzel Perryman in the second round, Butler now has to stay on-guard. Perryman plays with toughness and attacks running lanes with ferocity, racking up 9.5 TFLs last season at Miami. The selection of Perryman marks the third straight year GM Tom Telesco has picked a linebacker in the second round, showing how dissatisfied he is with that unit.

Manti Te’o, who finally emerged as a playmaker in December, has done a sufficient job of calling plays for the defense when Butler is out. It’s not a matter of if Butler gets benched, but when.

Ladarius Green has been talked about as a rising star ever since his strong 2013 season, when he caught three touchdowns (plus one more in the playoffs) and averaged 22.1 yards per receptions. However, Green regressed last season when he didn’t score and saw his offensive production cut in half, averaging only 11.9 yards per catch.

There are reasons to believe Green has yet to reach his full potential. Coach Mike McCoy stated earlier this offseason the team must do a better job utilizing Green. Rivers targeted Green only 23 times last season, seven times less than in 2013. Despite the decrease in touches, Green still recorded 12 first downs, only three less than the previous year. When the ball gets in Green’s hands, good things happen.

Expect to see Green used more in red-zone sets. Offensive coordinator Frank Reich will finally start to use Green’s 6-foot-6 frame in the back of the end zone. This, plus a planned increase in targets, will put Green at 10 or more touchdowns.

San Diego re-signed Brandon Flowers, who had three of the team’s seven interceptions last year. Jason Verrett, the team’s 2014 first-round pick, impressed before going down with a shoulder injury. Now add in third-round pick Craig Mager, who has the ability to knock balls out of receivers’ hands; third-year safety Jahleel Addae. who continues to improve; and Eric Weddle, who is entering a contract year; and this secondary could rack up big-time turnovers.

“I feel like a future lockdown corner,” Mager said.

Philip Rivers has been in the conversation the past several years. His completion percentage has been above 65 percent the past two seasons; he’s thrown for more than 30 touchdowns per season during that span, as well. Rivers had a tumultuous offseason where rumors swirled about him being traded to the Titans for the No. 2 overall picks. Now, he enters the season with even more questions as he beings the final year of his contract.

The Chargers would love to ink No. 17 to an extension, but Rivers prefers to wait until he knows: 1) if the Chargers will move to Los Angeles; and 2) if management is committed to building a championship contender.

What does this mean? It means the Chargers will get an even more competitive quarterback, one whose legacy and future are on the line. The addition of LG Orlando Franklin solidifies the offensive line, plus the drafting of Melvin Gordon (and the healthy return of Danny Woodhead) gives Rivers the running game he’s been missing since Tomlinson left town.

Rivers has every weapon he could ask for. Whether it’s his last season as a Charger, or potentially even the last season of his career (he will reportedly consider retirement of the Chargers move to Los Angeles and try to franchise him), he has every reason to come out guns blazing. If he can maintain that tone and lead this team to the playoffs, expect him to finally win MVP honors.

5. The Chargers Play their Last Game in San Diego

The Chargers are still awaiting the stadium advisory board’s proposal, but as stadium point-person Mark Fabiani has said, the franchise will have a pretty good idea where it will play in 2016 before this season gets underway. There’s a good chance this team moves to Los Angeles, either by going forward with the joint plan with the Raiders in Carson or by teaming up with Rams owner Stan Kroenke in Inglewood.

The Chargers play their final two regular-season games on the road, at Oakland and at Denver. There is a chance the Chargers could extend their run into the playoffs, but even then, more home games are unlikely unless San Diego can overtake the Broncos and Chiefs in the AFC West. What that means is the Dec. 20 home game against the Dolphins could be the last NFL game every played in San Diego.

What are your bold predictions for this season? Share them inside our new message boards!