How Do San Diego’s Ticket Prices Stack Up? 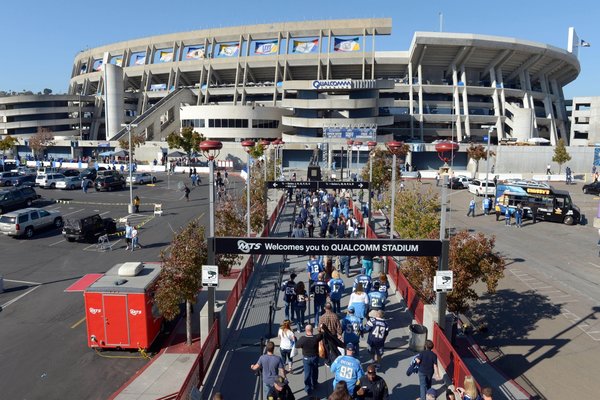 With the Chargers possibly entering their final season in San Diego, how are ticket prices being affected?

Using data from 2012-2015, I looked to see if overall team performance was any indicator of ticket price. Since 2012, the most expensive tickets belonged to the following teams: New England Patriots ($387), Seattle Seahawks ($372), Chicago Bears ($367), New York Giants ($312) and Denver Broncos ($304). To the casual fan, a ticket price of nearly $400 is absurd; however, if your ticket comes with a strong likelihood of victory, the price may be worth it.

Before the Buffalo Bills beat the Patriots in Foxboro in Week 17 last year (Tom Brady didn’t play in that game), the Patriots held a 35-game winning streak at home against conference opponents, dating all the way back to 2008. It’s a rare luxury to see such consistency in the NFL and the Patriots proved they simply do not lose at Gillette Stadium.

It’s pretty much the same story for Seattle and Denver, too; elite teams protect home-field like it’s a matter of life or death. The Broncos, Seahawks and Patriots are the only teams to accrue 40-plus wins (postseason included) since 2012 while also notching Super Bowl appearances (or wins, in the case of the Pats and Hawks).

If those teams comprise the elite, what’s the deal with the high ticket prices for the New York Giants and Chicago Bears? It’s not because they’re good, I can tell you that much. The Bears and Giants have a combined record of 45-51 (23-25 and 22-26 respectively) with zero playoff appearances since 2012. It’s one thing to pay top-dollar to see your team destroy its opponents; it’s an entirely different headache when they are losing.

Kudos to the Bears’ and Giants’ front offices for staying confident in the face of failure. Historic stadiums (i.e., Soldier Field) and high-cost metropolitan areas warrant such a price. Without any significant winning streaks or historic success, how do the Chargers measure up?

At less than half the price of Bears tickets, the median ticket for the 2015 Chargers sits at $154. This ranks as the 14th cheapest in the league (or 18th most expensive, depending on the fullness of your proverbial glass), $46 less than the league average.

Maintaining a respectable 28-24 record in the last three seasons (better than both the Bears and Giants), Chargers tickets suddenly feel like a steal. To top it off, instead of sitting in the paralyzingly cold weather in Chicago and New York, Charger fans get to relax in the mild San Diego sun and enjoy the competition.

That’s the other thing: the Chargers do a great job at keeping the game close. Whether they win or lose, you will watch a hotly-contested battle. Last year, the Chargers gave up exactly as many points as they scored (seven games were decided by a touchdown or less). If this ends up being the last season the Chargers play in San Diego, I would be pretty disappointed if I never attended a game.

The $154 median price may still seem like a lot of money, but it’s great relative to the rest of the league. We can watch second-year stud Chris Watt come into his own at the center position (replacing the retired Nick Hardwick) or Keenan Allen rebound from his sophomore slump.

When I lived in New York, I used to watched a bunch of New York Jets games with my dad at the Meadowlands. I would sit in the nosebleeds and watch Curtis Martin rush for 134 yards and Vinny Testaverde throw a pick in the waning seconds to lose the game. That wasn’t even the worst part: It was so cold outside that I would occasionally go to bathroom during the game to run my hands under those hot-air hand dryers until I got feeling back in my fingers. I wonder how many big plays I missed while I was in that bathroom?

I cherish the fact that I am able to watch Charger games without worrying about symptoms such as frostbite and will continue to appreciate this team. Well, at least until they move to somewhere cold.

Cool Things I Learned from this Research

1. The Buccaneers had the worst record in the NFL (2-14) and charge the same price as the Chargers. Who even lives in Tampa Bay?

3. Seahawks tickets rose $200 after their 2014 Superbowl victory. The cost of victory, I guess.

What do you think of San Diego’s ticket prices? Talk about them inside our new message boards!

Jesse Cohen graduated from the UCSD, where he studied Astrophysics. This scientific background helps Jesse to find insight through a statistically comprehensive and analytical view of the topics he covers. In addition to writing for SDBoltReport.com, Jesse is a contributing columnist for CampusSports.net, where he reports mainly on Pac-12 and West Coast college sports. When not covering sports, he plays ultimate professionally for the San Diego Growlers. Follow him on Twitter @Jon_Diebler.