How Much Will Weddle and Liuget Cost? 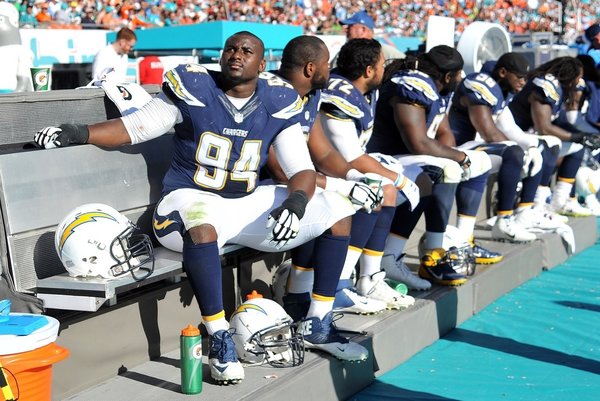 Because of free agency, it’s become increasingly difficult to keep a team together. That’s why most teams try to re-sign core players before they enter contract years. There’s been plenty of speculation about Philip Rivers and Antonio Gates being in the last year of their respective contracts and still unsigned, but what about the defense?

Eric Weddle and Corey Liuget are two key pieces of a defense that ranked No. 4 against the pass last season. Both are in the final year of their contracts and, like Rivers and Gates, remain unsigned.

Weddle earned another Pro Bowl invite last year after another productive season. While he only had one interception, no free safety in the league had more tackles (91). The 30-year-old is in the final year of a five-year, $40 million contract. His base pay this year is $7.5 million and his cap hit will be $10.1. Restructuring now would enable the Chargers to keep Weddle while he’s still in his prime and possibly create more cap room.

How much should the Chargers pay? Weddle, or his agent (David Canter), will certainly point out that top safeties in the league are making $9 million per year. Earl Thomas is the league’s top-paid safety, averaging $10 million per year and Weddle’s stats match up well with Seattle’s top safety (although his range does not). Weddle had 20 more tackles than Thomas last year and he defended more pases (9) than Thomas (6). Both had one interception.

On the other hand, the fact that Weddle turned 30 in January still means he’s on the wrong side of 30, and having that many tackles may just signify San Diego’s weak front seven. The Chargers were No. 26 against the run last year.

“He’s a major part of our football team, an excellent player,” said GM Tom Telesco of Weddle. “I’m sure our future would have him involved. There’s no doubt. We’re a better football team with him.”

It’s very unlikely the Chargers will find a better safety than Weddle in free agency, and if they do, it would come with a steep price tag. Weddle has indicated he wants to stay in San Diego, making a new deal easier to agree upon.

It will be an easy decision to re-sign Corey Liuget. The defensive end is in the last year of his rookie contract and has posted solid numbers. Liuget had 57 tackles last year, including 4.5 sacks and two forced fumbles. While those numbers do not jump off the page, they are impressive considering Liuget plays in a 3-4 defense, where the outside linebackers are supposed to get the majority of the sacks.

The Chargers will likely have to spend upwards of $6 million per year to keep Liuget. Michael Johnson, returned to the Cincinnati Bengals as a free agent with a 4-year contract worth $20 million. Johnson has 18.5 sacks in the last three years; Liuget has 17 and is three years younger. With the departure of Dwight Freeney, there will be even more pressure on the Chargers to get outside linebackers who can get into the backfield. If Liuget can produce sacks as well, he’ll be well worth the investment.