Jahwan Edwards ‘Excited for the Opportunity’ 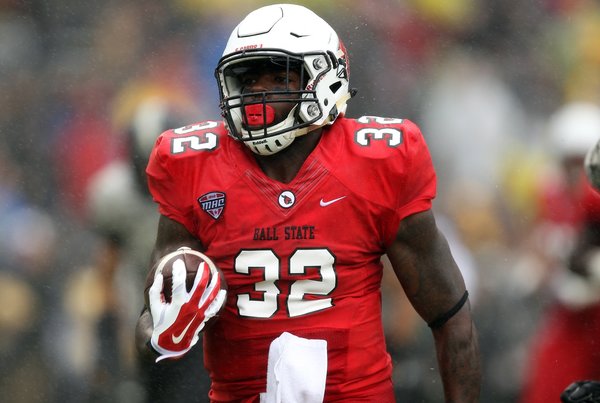 While Melvin Gordon may be the Chargers’ next great tailback, Jahwan Edwards aims to be their next great power runner. Signing with San Diego as a free agent after becoming Ball State’s all-time leading rusher, the 5’10”, 220-pound back can do more than just run over people.

“He’s a physical player, but he has the ability to make you miss, too. He’s certainly elusive,” said Ball State running backs coach Justin Lustig.

Lustig compared Edwards to a pitcher. If a defender sits on the fastball, he might whiff on the change-up.

“His fastball is putting his shoulders down and getting low, but his change-up is making a move and making a guy miss. He can do both,” Lustig said.

In addition to running the ball, Lustig said Edwards excelled in pass protection, and his good hands resulted in him lining up as a receiver in empty sets.

Edwards ran for 4,558 yards in four years at Ball State, good enough for fifth all-time in the Mid-American Conference. While he had a minor hamstring issue at the time of his Pro Day, he’s feeling good now as he prepares for Mini Camp on May 26.

“I’m ready to get out there,” Edwards said. “I know what I’m up against and I’m just excited for the opportunity.”

When asked about the prospect of playing for LaDainian Tomlinson’s old team, he admitted he paid more attention to power backs like Brandon Jacobs and Jerome Bettis.

“I didn’t watch [Tomlinson] a lot. I know he had a great spin move. I’m pretty sure I’ll be watching some film of him when I get there,” Edwards said.

Lustig doesn’t think coming into camp as a free agent will be a problem for Edwards.

“He’s been a guy that has always been overlooked. He had a big-time national tailback who was recruited ahead of him in high school, so he didn’t play running back until his senior year; then he came to us and on Day One he was our starter,” Lustig said. “I see the same thing happening now.”

Edwards had some preliminary discussions with the Washington Redskins, in addition to the Chargers, before the draft. When San Diego called after the draft was over, he jumped at the opportunity. He’s unfazed by the fact the Chargers took Gordon in the first round.

“I know Melvin Gordon is going to be taking most of the load, but I’m a team player. I’ll be there for everyone, play special teams, whatever I can do to contribute,” Edwards said.

Added Lustig: “He takes a lot of pride in his special teams play. His measurables may not be great, but the immeasurables are very strong. His dedication, toughness, grit and ambition are going to help him.”

Can Edwards be the power back the Chargers need? Join the discussion inside the message boards!

Can the Chargers Win a Ring for M-80?

Can the Chargers Offense Get Back to the Top?

SDBR Analysis: Inside Our Roster Projections