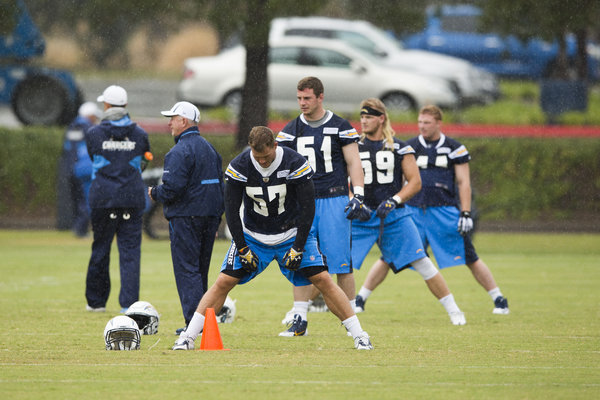 Ryan Mueller (back of the line). Photograph by Shana Siler, SDBoltReport.com

After the NFL Draft finished, Ryan Mueller, realizing he had not been selected, took a deep breath.

By the time he exhaled, the phone was ringing. It was a scout from the Chargers inviting the Kansas State lineman to mini camp as a free agent.

Mueller (6’2″, 245 lbs.) played defensive end in college but will come to camp as an outside linebacker. Arriving in San Diego as an undrafted free agent doesn’t faze him. He was a walk-on at Kansas State and ended up being the Big 12 Defensive Lineman of the Year and Second Team All American.

Coaches describe Mueller as a high-motor player who outworks his competition.

“I’m really excited. I get to surround myself with guys who are considered the best at what they do,” Mueller said. “To go in there and compete and earn a job … it says something about who you are if you can make it into the NFL. Talent only carries you so far.”

Mueller’s first talent was mowing lawns. He turned that into a landscaping business in high school that helped pay for his tuition when he walked on at Kansas State. Mueller was first noticed at a recruits-only practice that he attended by mistake. He was invited back to camp, made the team and then started dominating as an edge rusher.

While the Chargers may have been the first team to call him after the draft, other teams contacted him as well. Mueller chose San Diego.

While many players are described as “character guys,” Mueller’s community involvement is difficult to match. While a sophomore at Kansas State, Mueller learned through a message board about an 8-year-old boy with Leukemia who was a huge Kansas State fan. Mueller visited Kaiden Schroeder in the hospital, got him a Fiesta Bowl jersey, arranged for video chats with the team and then did something really special.

Last year, Mueller’s little friend attended the Kansas State Spring Game, decked out in a uniform, helmet and shoulder pads. He wore Mueller’s jersey number (44). Kaiden was inserted into the game, took a hand-off and scored an unforgettable touchdown (below).

If Mueller can make the same difference on the field as he has off of it, he has a good shot of latching on.

“Everyone in the NFL has a tremendous work ethic,” Mueller said. “I want to be one of those guys. I want to compete and be the best I can and make the team better.”

Does Mueller have what it takes to win a roster spot in San Diego? Join the debate in the message boards.