Ferguson on Williams: ‘We don’t feel we’ve seen his best’ 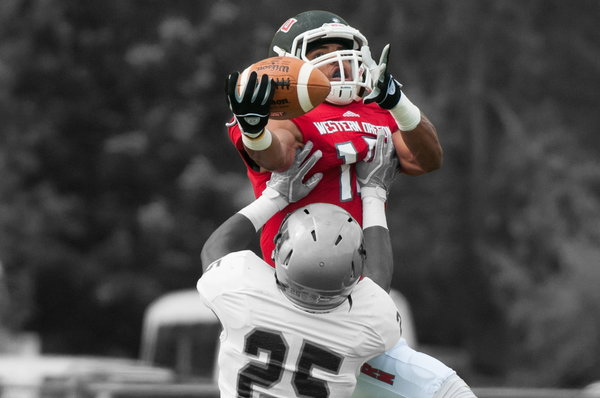 Western Oregon head coach Arne Ferguson knows a player with pro potential when he sees one. In his 10 seasons as coach of the Wolves, he has seen the Giants (TE Kevin Boss) and 49ers (OL Jason Slowey) each draft from his program, an impressive feat for a Div. II school not really known for football.

Now, WOU alumnus Tyrell Williams is following in their footsteps, as the talented receiver opted to sign with the Chargers as an undrafted free agent. Coach Ferguson wasn’t surprised by the Chargers’ interest in Williams.

The late bloomer, who arrived from Cascade HS in Turner, Ore., five years ago, put on a lot of weight and grew with the program to become the athlete he is today.

“He’s still developing and we expect him to be about 10 pounds heavier in a year, too,” Ferguson said.

The NFL began to take an interest in Williams last year, but every time the same issue would come up. Interested scouts wanted to know why he was playing at a Div. II school instead of a Div. 1 program, a concern that played a major role in his going undrafted.

Only 160 lbs. when he arrived at Western Oregon and with limited offensive experience, Williams had a lot of room to grow both in weight and the game.

“[He] worked extremely hard and became better and better the four years he was here,” Ferguson said.

Although Williams’ special teams experience is limited, Ferguson is not concerned for the rookie going forward. Williams will have to prove he can cover kicks — in addition to catching passes — if he hopes to stick around in San Diego.

“We didn’t play him a lot on special teams because he was the only 6-foot-4 guy we really had on offense, but I anticipate him being able to come in and do well.”

Williams’ limited use on special teams was also a product of the heavy burden he carried on offense. And although his senior numbers were not eye=popping (56 catches, 950 yards and eight TDs), they do not fully demonstrate just how much he contributed to the Wolves’ offense.

“His senior year he was double-teamed every play so they didn’t give up a touchdown,” Ferguson said. “The impact of the game, there’s a lot. But he had double coverage on about 85 percent of the game.”

Not only are the Chargers getting a player who can take over a ball game, but they’re getting a high-character individual who will be a great addition to the locker room.

Coach Ferguson was effusive in his praise of his former pupil’s personality.

Ferguson feels San Diego is a good landing spot for Williams. For one thing, the Chargers have an elite quarterback in Philip Rivers, as well as an experienced backup in Kellen Clemens. Those two will work with Williams to make sure he understands what’s being asked of him and reads the defense correctly.

Secondly, Williams joins a team that has a history of developing undrafted pass catchers. From big-time names like Antonio Gates and Malcom Floyd to less heralded contributors like Dontrelle Inman and Seyi Ajirotutu, the Chargers have a long history of giving undrarfted players a chance to get involved.

“[It’s] important [he’s with] a team that likes and develops receivers. San Diego has a history of that.”

For Ferguson, it’s been a five-year process watching Williams grow from a scrawny kid into an NFL player. He wants Chargers fans to know “just how hard Tyrell has worked and we don’t feel we’ve seen his best and [it’ll be] exciting to see what he can do.”