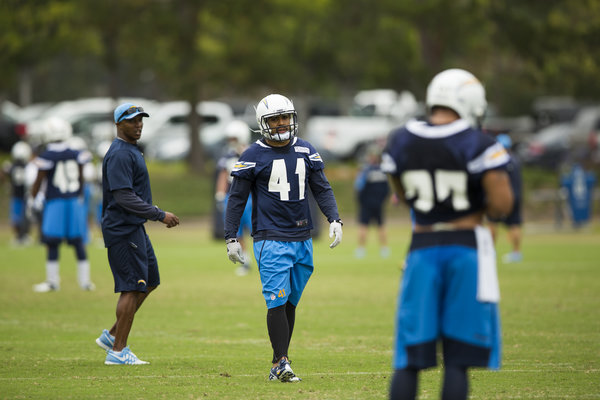 The Chargers took the field on Wednesday for the second — and it turns out, final — day of mandatory mini camp.

Wednesday’s practice was crisper and more energetic than Tuesday’s. However, at June mini camp it’s helmets only and no hitting, per league rules. And when there’s no hitting, the results of each play differ from player to player.

“Everyone thinks they won every play,” said center Chris Watt. “The linebackers think they made a tackle, we think we pancaked them.”

Offensive line coach Joe D’Alessandris puts a priority on flexibility. The days of linemen only playing tackle, guard or center are gone. There has been talk of D.J. Fluker moving inside to guard. The 360-pound right tackle has the size to move inside and the attitude that goes with it.

“I’m comfortable anywhere they put me,” Fluker said after practice. “They can put me at receiver, doesn’t matter to me. I can catch. Teach me how to do it and I’ll do it.”

D’Alessandris almost had to teach Fluker how to play center last season, as the Chargers started five centers due to injuries. Chris Watt was one of those centers and he’s back as the starter this year.

In addition to being the starting center, Watt is listed as a second-string guard as well.

“Got to be ready for every situation. As we saw last year, guys have to be ready to play in every spot,” Watt said.

The H-back position epitomizes the notion of versatility. David Johnson played five years in Pittsburgh as a fullback and tight end before coming to San Diego last year. Johnson is a bruising blocker with soft hands to keep linebackers honest.

“When we line up, every play they move me around, tell me where to go,” Johnson said. “As an H-back, you can play each position.”

After stretching and going through positional drills in the first hour of practice, the team ran some 7-on-7 drills in the second half of practice. Players wore no pads and contact was forbidden, but it was a good chance to let receivers hone their routes against the defense.

Reich Still Has It

At the end of practice, coaches took turns throwing the football, trying to hit the crossbar from 25 yards out. A successful try meant Thursday’s practice would be cancelled. After several failed attempts, a huge roar could be heard from the players as one throw pinged the cross bar. The passer? Offensive coordinator (and former Bills quarterback) Frank Reich.

Is Williams’ strong practice a sign of things to come? Talk about his prospects in our message boards!