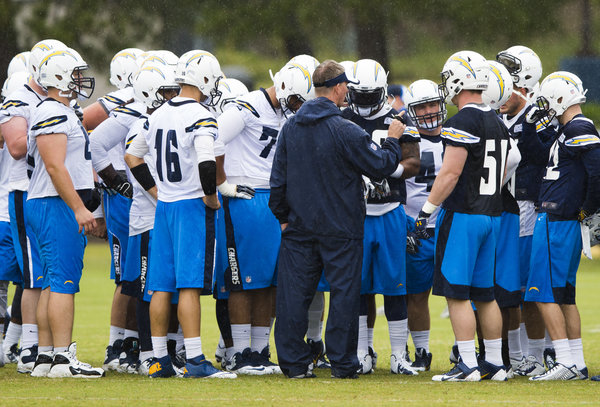 As I covered in a piece for Football Insiders last week, the Chargers are now quietly confident they will convince Philip Rivers to sign a long-term contract with the only franchise he’s ever known.

Rivers met with the San Diego media earlier this week at OTAs and did nothing to dispel that notion.

“It would be great if (I played here long term),” Rivers said. “You put in 11 years here, and we haven’t accomplished the ultimate goal. There have been a lot of great memories and a lot of awesome games, seasons, friendships, training camps and on and on. So that would be awesome. Obviously, players, none of us can just pick and choose how we want it to all work out. But if that was how it worked out, I’d be fired up.”

The possibility of a seven-figure extension is not the only thing that has Rivers fired up. He is working behind a retooled offensive line, one that added veterans Orlando Franklin and Joe Barksdale to the mix. He’s also throwing to a new receiver, Stevie Johnson, and handing off to a new running back, first-round pick Melvin Gordon.

All of those additions have Rivers thinking big as he heads into his 12th season.

“The energy and the excitement out there (at OTAs) was good,” Rivers said. “I don’t know if you’ve ever seen me be real negative. We were 4-8 (in 2008) and I thought we would get to the playoffs that year. But I think we can be really good. Obviously there is a long way before we find that out or not, but I’m excited.”

It’s not only the outside additions that have sparked Rivers’ enthusiasm. He is also looking for improvement from within as the Bolts look to get back into the playoffs for just the second time since the 2009 season.

Personally, Rivers spoke of focusing on his drops and footwork. After evaluating his performance from last season, when he turned the ball over 20 times, he realized that undisciplined drops and sloppy footwork were often the primary culprits.

It helps that Rivers is healthy after battling a serious back injury over the second half of last season. He reports “no issues” with his back and does not expect it to hinder his performance going forward.

Also in the “improve from within” category: Rivers is excited by what he’s seen from second-year center Chris Watt. After taking snaps from five different centers in 2014, Rivers is looking forward to some stability at the position. So far this offseason, Watt has looked up to the challenge.

“Seeing a guy even from his rookie year to his second year offseason, he’s just got a different presence about him,” Rivers said of Watt. “And he may not admit to it, but I can see (how) last year it was, ‘I’m figuring this out. I’m watching Hardwick, I’m watching these guys to figure it out. I’m starting a few games.’ It wasn’t that he didn’t have confidence, but he was still figuring it out. He just has a little bit of an aura about him that’s, ‘I belong here, and I’m ready to go be the center.’ So it’s neat to see.”

Watt is not the only second-year player with a different aura about him.

We recently covered Dontrelle Inman in a piece about San Diego’s Canadian imports (Inman and Cordarro Law). Inman did not get involved on offense until there were only six quarters left in the 2014 season. He responded with 12 receptions and 158 yards, including some clutch catches that contributed to an unbelievable come-from-behind win against the 49ers.

“Dontrelle Inman, not that he’s a super young player, but he’s always worked really hard,” Rivers said. “I always knew he was a dependable guy. Then all of a sudden we go to San Francisco and he wins us the game, then plays well in Kansas City. Now he’s just kind of like, ‘I belong here.'”

Another second-year player to watch is Jason Verrett. San Diego’s first-round pick in 2014 played well as a rookie, including a game-saving interception against the rival Raiders, but his season ended after just six games due to a shoulder injury. He is back on the field for OTAs and showing that the secondary will look entirely different with he and Brandon Flowers patrolling opposite sides of the field.

“Last year, this was new to me,” Verrett said. “But being able to be around for a year or so now and getting to know my teammates more is helping us to bond out there on the football field. We’re making noise now.”

Eyes on the Top

Just like every season, the Chargers have one primary goal for the regular season: win the AFC West. Unfortunately, they have come up short in that quest each of the last five years. The Broncos have proven to be the primary roadblock, winning the division the last four seasons. As such, the Chargers have to keep their eyes on Denver as they plan a move up the division standings.

And while no football fan ever wishes for an injury to any player, it is significant to note that Broncos LT Ryan Clady tore his ACL on Wednesday and is now expected to miss the entire 2015 season. Clady is not only the best left tackle in the game — he is arguably the most important non-quarterback in the league. His loss is devastating, especially for a team trying to protect an immobile, 39-year-old quarterback.

This is not to imply the Broncos are cooked. Clady missed all but two games in 2013 due to a Lisfranc fracture and the Broncos still won 13 games that season. But Manning is not the same player he was back then, making quality blindside protection all the more important.

This is the second significant injury the Broncos have endured and we’re still in the month of May. Rookie TE Jeff Heuerman, who was selected by Denver in the third round, tore is ACL during rookie camp and will miss the 2015 season.

Will Rivers sign an extension with the Chargers before training camp? Discuss in the message boards!