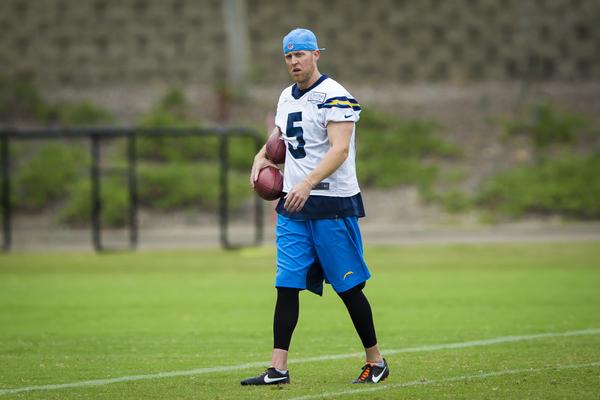 It has been a huge week at Chargers Park, from Corey Liuget’s extension to LaDainian Tomlinson’s induction into the team’s Hall of Fame. Moments like these give Bolts backers a reason to stand up and cheer. They also cause us to ask: When can we expect more moments like these?

Who’s Next to Get an Extension?

Rivers is still leaning towards playing out the final year of his contract, citing concerns about the team’s future in San Diego and its ability to build a championship roster. Weddle will not be offered a new contract, as the Chargers feel he has too much wear and tear on his body to justify another massive deal.

Gates, 34, is likely playing year to year at this point; if he wants to return, the Chargers will offer him a market-value contract after the season. The same can be said for Floyd, who has indicated he will likely retire following the 2015 campaign.

This means if the Chargers are going to knock out another extension, it will likely be with a player who still has two years remaining on his deal.

The best player to meet that criteria is Keenan Allen. However, Allen is coming off a disappointing second season in which his numbers dropped across the board. Team officials want him to prove he is still the playmaker he appeared to be in 2013 before paying him big money.

So, who then? How about Mike Scifres?

Scifres is 34 years old, but punters age like wine, not like cheese. Scifres is still one of the most dangerous weapons in the game, capable of flipping field position and pinning offenses deep in their own territory.

The new Chargers regime is well aware of Scifres’ importance. That’s why the team delayed putting him on injured-reserve after he broke his clavicle in a Week 14 game against the Patriots last season; the Bolts carried two punters over the next couple games to give Scifres a chance to potentially return in the playoffs.

Scifres has base salaries of $3.5625 million each of the next two seasons. If GM Tom Telesco offers him three more seasons at the same rate, Scifres will likely jump at the chance to finish his career with the only franchise he’s ever known.

Who’s Next into the Chargers Hall of Fame?

The Chargers have recently inducted some huge names into their Hall of Fame, including Tomlinson (2015), Leslie O’Neal (2014) and Junior Seau (2011).

“I will always be a San Diego Charger. I bleed Blue and Gold,” Tomlinson said.

The candidate we’re about to offer up is not known for making splashy plays like those three, but his longevity, toughness and consistency are too much to ignore. That candidate? Quentin Jammer.

Jammer joined the Chargers as the No. 5 overall pick in the 2002 draft. He spent the next 11 seasons in San Diego, appearing in 172 of a possible 176 games. During that run he established himself as the most physical cornerback in the NFL, averaging more than 65 tackles per season.

Jammer’s other numbers from his time with the Chargers include 127 pass breakups, 21 interceptions and seven forced fumbles. It’s that modest interceptions total (an average of less than two per season) that fuels his critics.

There are no two ways around it: Jammer had stone hands. He also had limited ball skills, failing to identify when the ball was in the air and make a play on it. However, that does not negate the consistently tight coverage that forced quarterbacks to throw to the other side of the field. Or the situational awareness that allowed Jammer to always be in the right place at the right time. Or the big hits that made ball carriers think twice about bouncing runs to the outside.

Jammer spent a forgettable final season with the Broncos. But seeing as he was forced to find new employment after the Chargers did not offer him a third contract, that transgression can be overlooked.

The Chargers will not retire Jammer’s number like they did Tomlinson’s. But there is no doubt that Jammer — after anchoring San Diego’s secondary for more than a decade — deserves his time in the sun, as well.

What’s Next on the Stadium Front?

San Diego officials are doing their best to create a detour on the Chargers’ path to Los Angeles. The latest curveball was thrown this week when officials proposed moving up the vote on a new stadium to Dec. 15.

The NFL will listen to relocation proposals in January, one from Rams owner Stan Kroenke (in Inglewood) and a joint venture by the Chargers and Raiders (in Carson City).

If the vote passes, the city can show the Chargers and the NFL that it is possible to build a new stadium in San Diego with hundreds of millions in public contributions.

The biggest issue with moving up the date of the vote is it makes it difficult to get environmental approvals done in time. That hurts one aspect of the financing plan by Mayor Kevin Faulconer’s task force, which proposed the sale of 75 acres at the Qualcomm Stadium site to a developer. That sale was to account for $225 million of the $1.2 billion project.

While questions remain, it is obvious the city is making genuine and purposeful efforts to beat the clock and get a legitimate stadium plan in place before the Chargers talk to league officials about relocation after the 2015 season. If San Diego has a viable stadium option on the table on that time, the NFL is likely to shoot down the shared-stadium proposal in Carson City in favor of Kroenke’s project in Inglewood.

The belief is only one of those projects will be allowed to move forward.

Who else should be in the Chargers Hall of Fame? Talk all about it inside our new message boards!