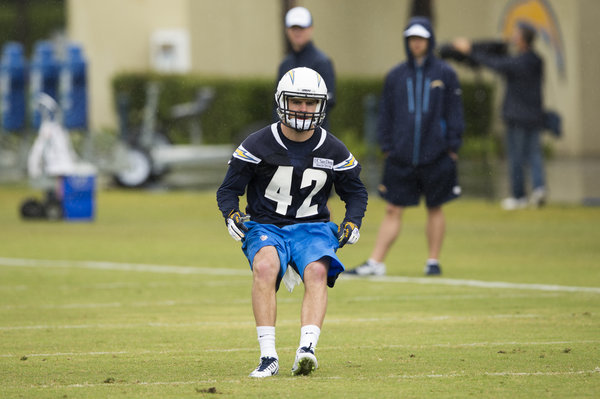 The Chargers signed FS John Lowdermilk as a priority free agent immediately following the NFL Draft. The Iowa product was a two-year starter, racking up 181 tackles, four INTs and 7.5 tackles for loss during his final two seasons. He’s a sound tackler with some versatility, to boot, making him a strong candidate to push for a spot on the final roster.

With San Diego’s first mini camp less than two weeks away, we took the time to catch up with Lowdermilk for an exclusive interview.

Dana McIntyre: Every kid dreams of playing in the NFL. What does this opportunity mean?

John Lowdermilk: It means a lot. This is something you train for as a little boy, to grow up and play a professional sport and be a professional athlete. I’m just blessed to have the opportunity to do it. There’s not very many kids that get to live out their dreams and it’s a lot of hard work and a lot of ups and downs and I really feel honored for the opportunity.

DM: Your dad played 12 seasons in the NFL. What was it like to tell him you signed with the Bolts?

JL: We were all just sitting around [after the draft]. Once I finally got the call, it was pretty awesome. [Dad] had a pretty successful career and he helped me out and gave me some advice on things and it’s just something I’ve always dreamed of. He’s been really supportive of me and it’s really cool and I’m just thankful for the opportunity and counting my blessings.

DM: I know you wanted to play for Ohio State and follow your dad’s footsteps. Instead, you ended up playing at Iowa and getting to play in the Horseshoe as a visitor. What was that like for you?

JL: Playing in the Horseshoe was kind of weird because I grew up there, going to Ohio State games, so it was definitely kind of weird. Once I started playing the game I just kind of forgot about everything else and played and focused on what I had to do. I signed with Iowa and I think it was better for me — a much better fit. I loved coach [Kirk] Ferentz and coach [Phil] Parker, the defensive coordinator. Things just happened to work out and I’m really happy with the way things worked out. I’m really happy that I was a Hawkeye.

DM: You played on both sided of the ball in high school. Do you ever miss playing quarterback?

JL: Not really. I knew coming out of high school that I wasn’t going to play quarterback in college. I knew I was more of a physical player and I was probably going to be a defensive player. I love the physical aspect of the game so I don’t really miss playing quarterback, but you know, there are some times I kind of miss getting the ball a lot and throwing it out to the receiver. But for the most part, I like being on defense. You don’t get as much glory and I like that kind of more.

DM: So we don’t have to warn Philip Rivers that you’re coming after his job?

DM: Are there any similarities between your position now and quarterback?

DM: What do you think you need to do to make the team?

DM: You haven’t had a chance to work with Eric Weddle yet, but all indications are he will be there for mini camp. Are you looking forward to playing alongside him for the first time?

JL: Oh, It’s gonna be awesome. I’ve actually looked up to him for a long time and it’s just kind of funny how things work out and I’ll probably be annoying and ask a lot of questions. Kind of learn the defense and pick up things so I’ll probably just be like the annoying little brother. From everything I’ve seen, he’s a heck of a guy and I’m sure he’ll be willing to help out. I’m just excited I get to learn from him.

DM: You played with CB/KR Micah Hyde at Iowa before he was drafted by the Packers a couple years ago. How is his success in Green Bay a motivator or inspiration for you?

JL: Micah is one of my really good friends and as soon as I got to Iowa he helped me out as soon as I got there, because he started out as a corner then switched to safety before he moved back to corner. He helped me out a lot. I went and visited him last year, went to a Packers game. He invited me and he just talked about things you have to do. Throughout our time at Iowa he helped me out there and he’s kind of given me some words of wisdom on how to make an NFL team and be successful. He’s a great friend and a great teammate and a good guy to have in your corner.

DM: Have you studied John Pagano’s schemes? How do you see yourself fitting into a secondary that was highly ranked last year?

JL: Whatever they ask me to do, I’ll do. I’m more of a physical player. I’m more than willing to do anything to help the team out and make the team. That’s the ultimate goal.

DM: What do you think of Brock Hekking’s mullet?

JL: I just remember seeing it one night after we just got done with a practice. He looked like that Oklahoma Sooners linebacker from the 80’s, Brian Bosworth. I think it’s a great look.

DM: I saw on Twitter you saw Shaquille O’Neil’s fall. How did you feel about that?

JL: That was hilarious. Those guys are comedy all the time and you can tell it’s not scripted. They just say whatever is on their minds and how they feel and I’m sure TNT doesn’t like everything they do, but I think everybody watched it because it’s pure entertainment. I just laugh every time I watch that.

DM: Did you have any feelings of familiarity when you saw him fall? Did it bring back any memories for you?

JL: No, I didn’t think of that. It’s not a good feeling, though. That’s the worst experience of my life. You go from the ultimate high to the ultimate low in a matter of minutes.

Can Lowdermilk overcome the odds and win a spot on the active roster? Discuss in the message boards!