Seiler on Mueller: ‘No one’s gonna outwork him’ 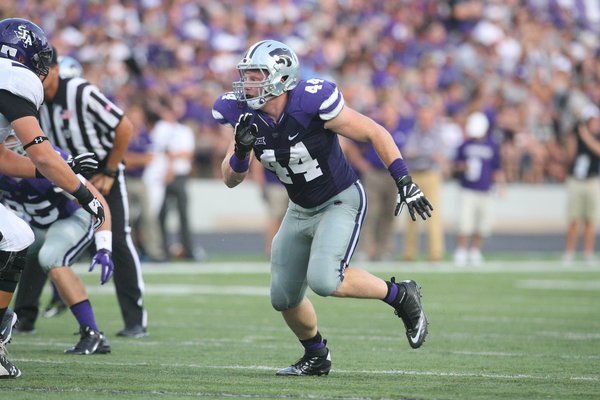 The Chargers added a relentless and disciplined pass rusher by signing Kansas State’s Ryan Mueller as an undrafted free agent. A former Wildcats walk-on, Mueller dominated over his final two seasons to the tune of 102 tackles, 17.5 sacks and 29.5 TFLs.

Mueller found a good schematic fit in John Pagano’s hybrid 3-4 defense. While he played defensive end at college — and was extremely effective against the run — he is too small (6’2″, 245 pounds) to be a down lineman in the NFL. His best chance to catch on is as a situational pass rusher who dominates on special teams.

There is certainly room for another outside linebacker on the roster after Dwight Freeney and Jarret Johnson left town earlier this offseason. If Mueller can develop a few more pass-rush moves and prove he can hold up in space, he has a real chance to earn a spot on the 53-man roster.

To learn more about Mueller and what he brings to the Chargers, we check in with Kansas State defensive ends coach Blake Seiler.

Scott Neinas: What kind of player is Ryan Mueller?

Blake Seiler: Ryan is just a relentless effort guy. He’s going to outwork the guy across from him, that’s just how he approaches it. He’s such a competitor. He’s played against some really good offensive linemen in this league and no one has outworked him.

SN: How do you like Ryan’s chances of standing out in training camp?

BS: Ryan really takes to coaching. He breaks things down well. He focuses on the little things that a lot of the other guys overlook. He’s a technician and a tireless worker.

SN: Did you recruit Ryan?

BS: No, we found him when he kind of showed up for a practice on a whim. It was meant for recruits only but he impressed us so much that we invited him to camp. We redshirted him the first year, the second year we had him playing on our rush packages, then he started his junior year and tied the school record in sacks (11.5) and was named Big 12 Defensive Lineman of the Year.

SN: What was the key to his success at Kansas State?

BS: When he came to camp he weighed 205 pounds. He just steadily put on weight, and he’s such a relentless motor guy. He wasn’t as big as some of the other guys, but he was just relentless on the field, has a motor that never stops. He’s one of the hardest working individuals I’ve ever been around.

SN: Ryan is coming to Chargers camp as an undrafted free agent. What are his chances of making the team?

BS: We’ve had a lot of walk-ons that have come through here and of all of them, he’s the guy I really think can latch on in the league and make it. He’s been an underdog his whole life. No one’s gonna outwork him, I can say that much.

Does Mueller have a shot to stick in San Diego? Join the discussion inside the message boards!