Time to Trim the Beard? 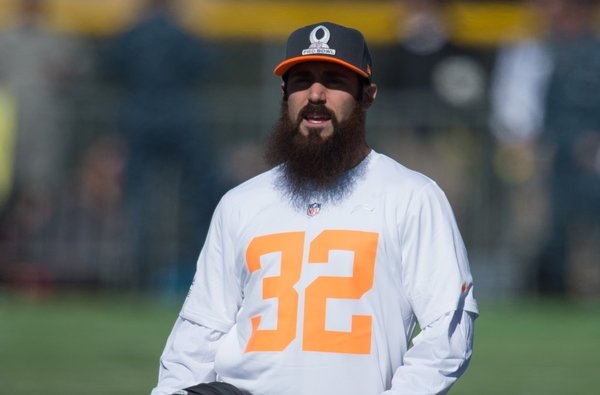 Eric Weddle is not attending the San Diego’s voluntary offseason workouts. That is not a typo. Weddle, who is in the final year of his contract, is seeking an extension; however, at the moment the team does not feel the need to indulge in extension talks.

Weddle told Kevin Acee of UT San Diego that he felt “highly disrespected.” For those who know Weddle and his work ethic, for him to miss any team function — voluntary or not — shows just how serious of a situation this is.

Weddle is entering the last year of a five-year $40 million contract. At the time, it was the largest contract ever signed by a free safety, which led to the team and fans to hold high expectations of the former second-round draft pick. Let’s take a look back at the first four years of Weddle’s contract to see if those expectations were met.

After moving to the forefront of the Chargers secondary in 2010, Weddle continued to soar without any new contract hangover. While some players succumb to the pressures of signing large contracts, Weddle went on to post 88 tackles and set a career-high with seven interceptions, two which came late in separate fourth quarters. Weddle was voted into his first-ever Pro Bowl game, where he represented the Chargers well with two interceptions. Weddle was also on his way to becoming an established leader in the team locker room, when he was voted by his team Defensive Player of the Year.

Weddle continued to lead the league for total Interceptions over the course of the calendar year by adding three more picks in 2012. Although his interception numbers were lower, his tackle stats soared higher, as he logged 111 tackles. Weddle was given first-team All-Pro honors by multiple media outlets. Although the team had a difficult year offensively as the Norv Turner era was coming to an end, Weddle still found a way to play inspiring defense, adding two forced fumbles and scoring one defensive touchdown.

Entering his second year working with defensive coordinator John Pagano, Weddle set a career-high with 115 tackles while being selected to his second Pro Bowl. Despite his big-time contract, Weddle still played on special teams, where he memorably called an audible on a punt in a Week 17 game against the Chiefs in which the ball was snapped to him and he ran it up the middle for just enough yards to set up a game-winning score, ultimately sending the team to the playoffs for the first time under new head coach Mike McCoy.

Interception numbers continue to get smaller for Weddle, who finished the season with only one pick. However, the team struggled to create turnovers as a whole. The Chargers finished the year tied for 28th in the league with only seven interceptions. The team missed out on the playoffs but the secondary held opponents to 214.2 passing yards per game, the fourth lowest in the league. Weddle, a major factor in that statistic, led the team in tackles again with 114 and was voted into his third Pro Bowl.

Eric Weddle has been to the Chargers defense what Philip Rivers has been to the offense: a model of consistency. Weddle has played in 80 straight games, has worked alongside eight different strong safeties and played in 60 percent of the team’s special teams snaps over the course of his current contract.

Weddle repeatedly told Acee: “I want to retire a Charger.” Yet even he knows there’s possibly more money to be made elsewhere, and in states that have significantly lower tax incentives for athletes, all factors Weddle will begin to see with more clarity as the Chargers continue to put off extension talks.

The 2011 season might have been an outlier year for Weddle when it comes to interceptions. He hasn’t come close to putting up those kinds of numbers since. But with Weddle you’re buying not just a free safety, but also a defensive anchor. And in an offseason where the Chargers have threatened to relocate, trade away their quarterback, and now put their Pro Bowl safety in a holdout, everyone wants to know, is this team about to cut and run?