Time to Worry About the Raiders? 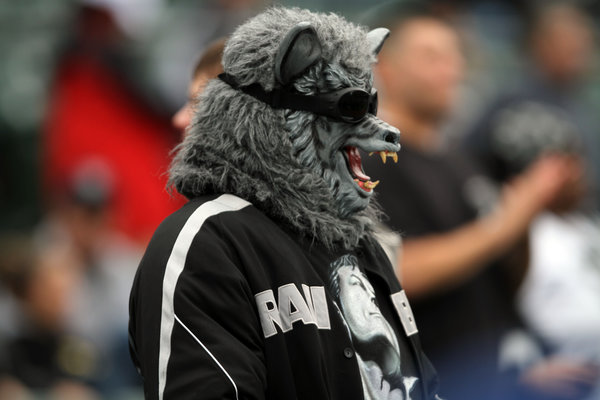 Each of the last two seasons, the Chargers have finished in third place in the AFC West behind the Broncos and Chiefs. And while catching both of those teams will be a challenge again in 2015, San Diego has something new to worry about: holding off the up-and-coming Raiders.

For some time now, the Raiders have been the only “gimme” in the AFC West. Oakland has not posted a winning record since 2002, going a combined 56-136 during that span. The Chargers have taken full advantage of their rivals suffering through an extended down period, going 19-5 against the Raiders during that stretch.

However, it’s a new era in Oakland now and wins figure to be tougher to come by.

The turnaround began in May 2014 when the Raiders hit a home run in the draft, picking LB Khalil Mack in the first round and QB Derek Carr in the second. Just like that, GM Reggie McKenzie landed young superstars capable of igniting a turnaround on their respective sides of the ball.

“He’s got a really quick release, good decision maker; he’s shown some of that grit we’re looking for, some of that toughness, so he’s a guy that we feel like we have an opportunity to build around,” Del Rio said of Carr.

Carr and Mack proved themselves in their meetings with the Chargers.

In the first Chargers-Raiders game in Week 6, Carr threw four touchdown passes and was driving his team towards the game-winning score until he was intercepted by Jason Verrett with less than a minute to play. In the second meeting in Week 11, Mack & Co. held the Chargers to just 13 points. Mack finished with five tackles and his first career sack.

Oakland’s progress continued this offseason with another strong draft headlined by WR Amari Cooper. The game-breaker from Alabama is an early favorite for Offensive Rookie of the Year because of his size, speedy, versatility and polished routes.

“[Cooper] is ridiculous in and out of his breaks,” Carr said. “His style of play is perfect for this league. He’s good at making fast-twitch movements. I think the sky’s the limit for him.”

The Raiders have made strides in free agency, as well. This offseason alone, they added outstanding anchors to both sides of the line in C Rodney Hudson and NT Dan Williams; they improved depth at the skill positions with RB Roy Helu and WR Michael Crabtree; and they bolstered their defensive back-seven with LB Curtis Lofton and FS Nate Allen.

Whether all these additions allow the Raiders to snap the league’s second-longest playoff drought (12 seasons) remains to be seen. But one thing is for sure: This team is no “gimme” anymore.

Hopefully, the Chargers are paying close attention to the improvements being made by their rivals to the north. Last year, San Diego went just 2-4 in the AFC West, with both of those wins coming at the expense of the Raiders. If the San Diego players are not careful, their lot in the division could get worse before it gets better.

The Chargers and Raiders will be uniquely tied together for much of the season. In addition to striving to scrap their way up the division standings, both franchises are competing for a spot in Los Angeles.

The teams entered the race together as unlikely partners, proposing a shared stadium in Carson City that — if realized — could result in one of the longtime AFC West teams being reassigned to another division. But most likely, things between these two teams will end up like they always do … in heated competition.

The NFL would like to put one team in Los Angeles in 2016 and add a second team a year or two later. If the first team to jump is the Rams (which is likely, given that Stan Kroenke’s Inglewood project is well ahead of the Carson City project at this point), the Chargers and Raiders would be left to compete for L.A.’s second and final vacancy.

And in an unusual flip of the script, that competition will see San Diego fans voting for the Raiders to win and Oakland fans pulling for the Bolts to get their wish.

In the meantime, football fans in San Diego and Oakland are left hoping for a Christmas miracle as they wish for their respective teams to stay put. Maybe by the time the Bolts and Raiders meet in Oakland on Christmas Eve, this too will be settled.

How will things shake out this season in the AFC West? Talk about it inside our message boards!