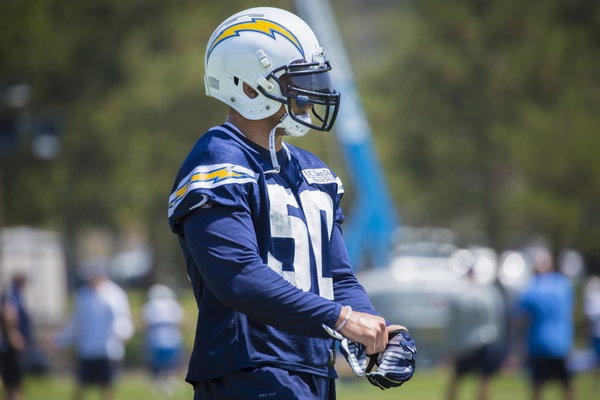 The Chargers had clearly defined needs heading into this year’s draft: running back, guard, outside linebacker, safety and nose tackle chief among them. But after addressing the running back position in the first round (Melvin Gordon), GM Tom Telesco threw a curveball by going with ILB Denzel Perryman in the second round. Now, Perryman will battle with incumbents Donald Butler and Manti Te’o for playing time in the middle of John Pagano’s defense.

This conversation must begin with Butler, who was considered a defensive cornerstone after signing a seven-year, $51.8 million extension last offseason (although it was really a three-year deal, for all intents and purposes). Unfortunately, he really struggled last season, especially early in the year.

Injuries played a role in that, which has become a recurring theme for Butler. Quad and elbow injuries slowed him down and caused him to miss a couple games, marking the third straight season he has missed at least two games due to injury.

“I’m healthy again,” said Butler during OTAs. He also revealed he underwent “a couple surgeries” in the offseason.

But injuries alone to not explain his passive and uninspiring play. He finished with a career-low 73 total tackles and failed to force a turnover. Pro Football Focus, which ranked Butler as a top-20 linebacker in 2011 and 2012, gave him an overall grade of -9.6 for the 2014 season, his second consecutive season in the red.

Butler’s struggles help explain why Telesco chose Perryman in the second-round. A physical, downhill defender who loves to deliver knockout blows, Perryman provides toughness and swagger that have been missing since Shawne Merriman left town.

Telesco has called him a “hammer.”

“We call them hammers — guys that hustle, play hard and play physical,” Telesco said. “We think you need those to play in this league. And we designate some players as hammers.”

Does the drafting of the “hammer” mean the axe is coming for Butler? Not quite yet.

While there is certainly hope within the organization that the drafting of Perryman will light a fire underneath Butler, it is more likely that Perryman will be taking reps from Manti Te’o, at least initially. That’s because Perryman’s greatest weakness — pass coverage — is Te’o’s greatest strength.

Te’o, who intercepted seven passes during his senior season at Notre Dame, struggled for a while to bring those playmaking skills to the NFL. But he appeared to hit his stride over the second half of last season, recording an interception and two pass breakups in a Week 14 loss to the Patriots and a sack (plus 11 tackles) in Week 16’s come-from-behind win over the 49ers.

If Butler responds as expected to the increased competition, he figures to hang onto his starting job while Perryman and Te’o rotate beside him (with Perryman playing on running downs and Te’o coming in for obvious passing situations). If Butler struggles like he did over the last couple seasons, Pagano will let the young pups take the lead. If Butler falls out of the rotation, Pagano could opt to use safety Jahleel Addae at linebacker in the nickel and dime defenses, which is a strategy the Chargers employed at times last season with mixed results.

There could also be an interesting battle brewing behind these three. In our initial roster projections, we have undrafted rookie Nick Dzubnar (Cal Poly San Luis Obispo) making the team over Kavell Conner. There is no need to repeat our logic for that decision, which we detailed in this roster analysis story.

It is worth noting that cutting Conner would be a tough pill for Telesco to swallow, given that Conner followed Telesco over from Indianapolis. However, familiarity does not always breed success (see Brown, Donald).

Regardless of how things play out, new linebackers coach Mike Nolan will play a major role in shaping the identity of not only this transitioning linebacker corps, but entire defense.

For more on Nolan and the challenge ahead of him, check out this Football Insiders feature.

Do have a story idea you’d like us to tackle? Offer up your suggestions in our message boards!