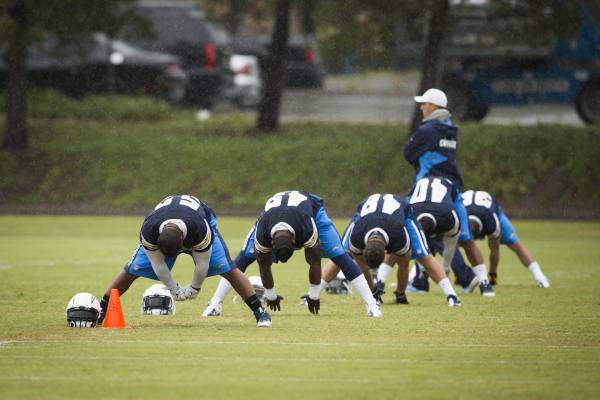 One of the most important qualities any player can show in training camp is the ability to improve. This is especially true of undrafted free agents, who were passed on 256 times for a reason. One such undrafted rookie who has improved during Chargers training camp is ILB Ikechi “Chi Chi” Ariguzo.

Ariguzo looked like Swiss cheese in coverage when camp first opened, allowing easy completions to TE David Paulson and WR Titus Davis while working with the third-team offense. To be fair to Ariguzo, it’s really no surprise a rookie struggled on the first day of camp.

What is surprising is how much Ariguzo has improved over the last 10 days, and how many impact plays the former Northwestern standout has delivered. Last Wednesday, Ariguzo demonstrated dramatically improved coverage skills during 11-on-11s with a huge interception in the middle of the end zone.

Ariguzo again made a big play in coverage on Saturday, this time in front of thousands of fans during Fan Fest at Qualcomm Stadium. Ariguzo had a perfectly timed hit on RB Jahwan Edwards to break up a pass over the middle of the field. The former Wildcat also showed fluid footwork and good hands in one-on-one drills. With the improved play and increased impact Ariguzo has shown over the past few days, the linebacker may actually have a pretty good chance of making the 53-man roster when it is all said and done.

Looking back at the past two seasons, head coach Mike McCoy has entered the regular season with five inside linebackers on the roster. Currently, the Bolts only have seven players listed at that position.

The first four of these spots are likely already taken. Starters Donald Butler and Manti Te’o have shown improvement over last year, while backups Kavell Conner and 2015 second-round pick Denzel Perryman have looked impressive working with the second-team.

If the Chargers carry five middle linebackers, Ariguzo has clearly shown more in practice than fellow rookies Nick Dzubnar and Curtis Grant. Still, it would not be surprising if the Bolts decided to keep a player from another position — like wide receiver — instead of a fifth inside linebacker. Should that be the case, Ariguzo would clearly be the odd man out.

The next time the Chargers will take the field at Qualcomm will be on Thursday, August 13 for the first preseason game against the Dallas Cowboys. If Ariguzo continues to improve and make standout plays through the preseason, then he should have a solid shot at a roster spot come September.

What kind of impact will Chi Chi Ariguzo make this year? Talk about it in our message boards!

A San Diego native, Trenton Villanueva graduated from San Diego State University with a bachelor’s degree in Journalism and a minor in the hydraulic principles of the keg. Prior to writing for SDBR, he covered sports news for FanSided and wrote music reviews for the San Diego State Daily Aztec. Follow him on Twitter @TrentNotDilfer