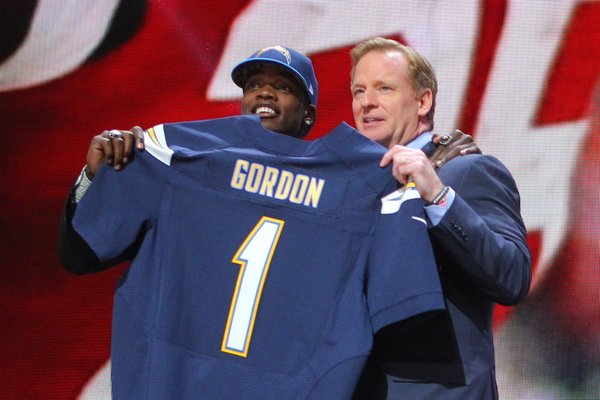 It turns out, the writing on the wall indeed read: “Melvin Gordon.”

Everything GM Tom Telesco did this offseason pointed to his intent to select a running back in the first round. He replaced every starter he lost in free agency (replacing Eddie Royal with Stevie Johnson, Chad Rinehart with Orlando Franklin, Marcus Gilchrist with Jimmy Wilson and Shareece Wright with Patrick Robinson) with the glaring exception of Ryan Mathews.

Telesco swore up and down that he was content with the three running running backs still on the roster — Branden Oliver, Danny Woodhead and Donald Brown — but those are just the kind of lies general managers are required to tell this time of year.

Telesco left a gaping hole in his backfield on purpose, filling it on Thursday by trading up two spots with the San Francisco 49ers to land Wisconsin RB Melvin Gordon. It cost the Chargers two extra picks to make the move (a 2015 fourth-round pick and a 2016 fifth-round pick), which is somewhat troubling, because it seems like Telesco panics on draft day and trades up for players too readily instead of letting the talent come to him. Nonetheless, it is hard to complain about the player he netted with this latest swap.

As a senior Gordon rushed for 2,587 yards, the second-highest total in FBS history (just 32 yards behind Barry Sanders). The year prior, he led the nation with 29 rushing touchdowns. He averaged 7.8 yards per carry over his entire career as a Badger, showing how consistent and explosive he truly is.

Gordon (6’1, 213 lbs) runs over would-be tacklers, is shifty in the open field and uses jump cuts almost as effectively as the man the Chargers took in the first round of the 2001 draft — LaDainian Tomlinson.

“Never take anything for granted and never be complacent,” Gordon said. “Every game I went out there with a purpose, and that was to win.”

Gordon immediately jumps to the front of the line in San Diego’s backfield. With his arrival — and the healthy return of Woodhead — the Chargers should get far more big plays from a group that averaged just 3.3 yards per carry in 2014.

Gordon provides a lot of that juice himself; last season, he had 40 runs of 15-plus yards.

The one question about Gordon is his pass-catching ability, as he only caught 22 passes over his entire college career. It should make Bolts backers feel better to know the same questions plagued Tomlinson when he first came out of TCU’s option-based offense. L.T went on to catch 624 passes in his career, including more than 50 catches in each of his first eight seasons.

Telesco feels Gordon can be a similarly dominant all-around back.

“He’s got size, he’s got speed. He can pass protect, he can catch the ball,” Telesco said.

Now let’s see if he can run the Chargers back into the playoffs.