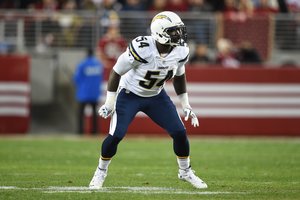 If there’s one area where the Chargers need to demonstrate marked improvement, it’s the pass rush. Corey Liuget led the team with 4.5 sacks last season, and it’s never a good thing when a 3-4 defensive end leads his team in sacks — that role is supposed to be reserved for the outside linebackers.

Last year’s outside linebackers, Jarret Johnson and Dwight Freeney, are gone. Johnson retired and Freeney was released. The Chargers will now rely on some recent draft picks to help get more hurries, more hits and — most importantly — more sacks.

Jeremiah Attaochu (second round, 2014), Tourek Williams (sixth round, 2013) and Melvin Ingram (first round, 2012) all look to step up for San Diego this season. Ingram and Attaochu are penciled into the starter’s roles, while Williams figures to see plenty of snaps as the top reserve, especially in obvious running situations.

If Attaochu comes close to matching his production in college, watch out. The Nigerian had 16 tackles for loss and 12.5 sacks in his senior year at Georgia Tech. Last year, after the Chargers moved up to draft him in the second round, he opened the season with a strip-sack and a blocked punt against the Cardinals.

Attaochu, who missed five games with a hamstring injury, ended up with just two sacks on the year while playing behind Johnson and Freeney. He will use his speed (4.58 and 4.63 times in the 40-yard dash) and his athleticism to get past blockers this season.

Williams is also waiting in the wings. The 6-4, 260-pound outside linebacker is entering his third year. His transition from a down lineman in college should be complete now, and if he wins a starting job he’ll make Tom Telesco look good, as the Charger GM stole Williams in the sixth round two years ago.

Williams will never be a sack-master (one sack in two seasons), but he is relentless in pursuit and reliable in setting the edge. Those are traits that made Johnson so effective throughout his career, so it’s reasonable to expect Williams will help fill those shoes.

Perhaps the most promising candidate to make plays is Ingram. He came back early from an ACL tear in 2013 and now that two years have passed from the injury, it could mean a stronger first step. Ingram was the Chargers’ first-round pick in 2012 and showed last year that he can produce, getting four sacks and two forced fumbles in just nine games. If you extrapolate those numbers to 16 games you get a very useful seven sacks, which would have led the team.

A solid pass rush could turn a top-four pass defense into an elite defense. Because of that, these three Telesco picks could have a huge impact toward taking the team to the next level defensively.